Crowdfunding Platforms: To Each Their Own

In the past 3 years, alongside the development of crowdfunding, hundreds of intermediary services called “crowdfunding platforms” have emerged to act as an interface between the public and the funding projects, with the aim of facilitating transactions.

Crowdfunding (CF) platforms are now the standard solution for people wishing to run a crowdfunding project.  We saw some brilliant examples of crowdfunding initiatives brought forward without a platform, like the popular Obama’s campaign. However the need for such solutions came in almost immediately, and some of today’s most popular CF platforms, like Kickstarter and IndieGoGo, were born at very early stages.

The strength of crowdfunding platforms is not only the fact that they offer a turnkey solution, but in that they also develop knowledge and experience through their routine work which is invaluable. Furthermore, they reduce the transaction cost and the legislative complexity. Also they will have passing traffic that will often fall outside one’s own contacts, and the ability to reach beyond the immediate audience is a key aspect of running a successful campaign. 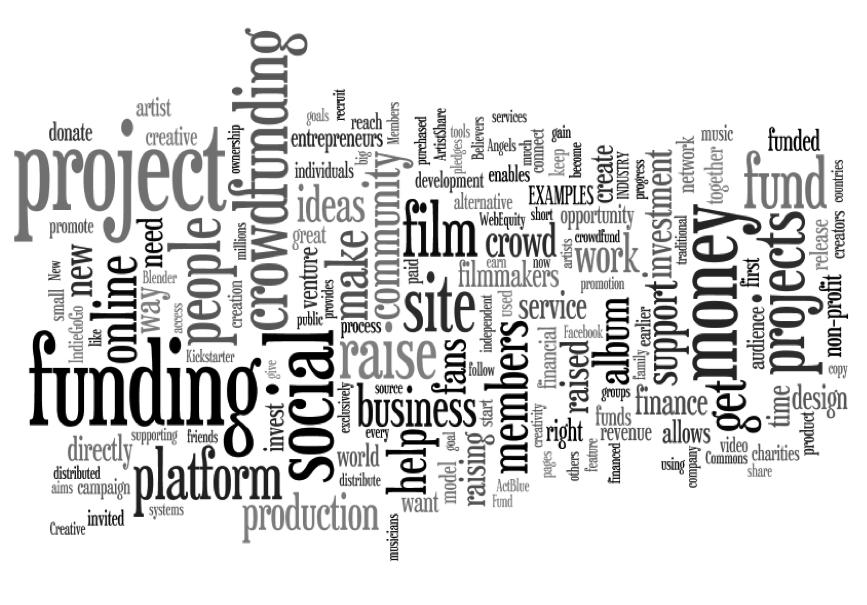 In what is still a relatively early phase, regulation is moderate and a lot of experimentation is taking place, hence the wide range of crowdfunding platforms.

According to a recent survey produced from a collaboration between PleaseFundUs and Crowdsourcing.org, there are about 340 crowdfunding platforms in the world, 85% founded in North America and Europe, with United States, UK, Netherlands and France having the largest number. 46% of all UK platforms were launched this year. In this post we will propose a classification of crowdfunding platforms, bearing in mind that this is totally arbitrary and that a lot of variations and submodels exist.

We decided to classify the platforms by the type of return people will get, i.e. rewards, equity, or micro-credit, and further by some of the more affirmed sub-models. 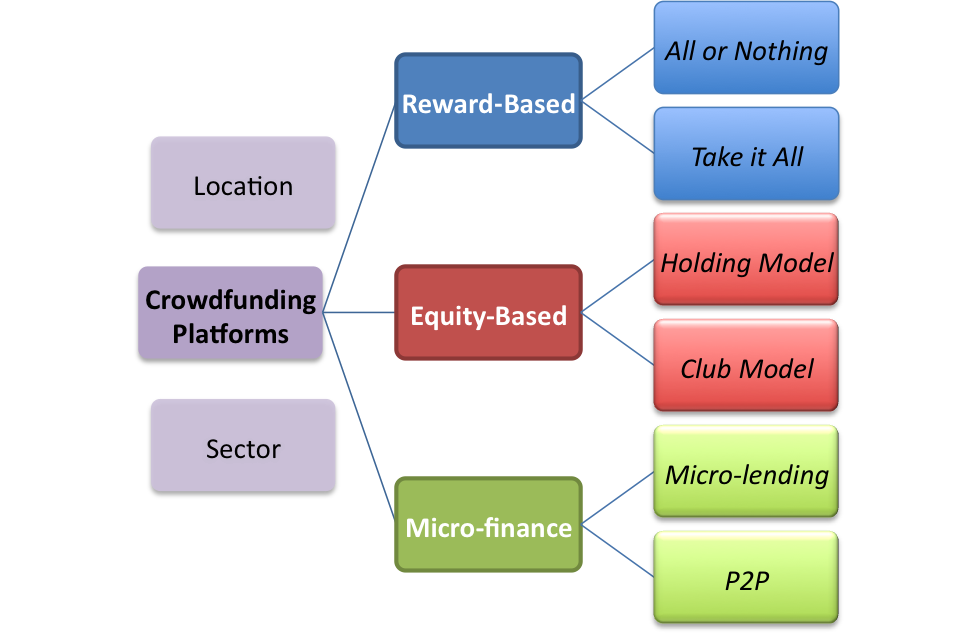 This model can be further split into two main models:

–    ‘all or nothing’ model (the largest used funding model)

The “all-or-nothing model”
The main characteristic is that the targeted sum of money must be reached within a pre-arranged period of time (generally set by the platform) via the contributions of the backers before any financial transaction is generated. If the target is not met, the fundraising is regarded as unsuccessful, the financial transactions won’t happen and the money will stay or will be transferred back into the pledgers’ bank account. In some models the pledged amounts are transferred to another account, which is managed by either the platform, or can be reallocated to another project. A popular example of this model is Kickstarter, which only pays out to successfully funded projects. Other more or less popular platforms which follow the same model are Crowdfunder, WeFund, Sponsume, WeDidThis, Pozible.

The ‘keep  it all’ model
In this case, funding is paid immediately to the project, regardless of whether or not the project reaches its funding goal by the deadline. IndieGoGo is a popular example, followed by Sponduly. Interesting to see the model created by RocketHub, “All And More”. RocketHub is a crowdfunding site for creative projects. You keep all the money you raise even if the target is not met, but if you reach or exceed your project’s financial goal some submission fees are waived.

Equity-based Models
Investment or equity models first became known through two platforms specialising in the music business (SellaBand and Bandstocks). Project initiators and their partner platforms typically define a time period and a target amount. The target is then divided into thousands of equal slices, which are offered via the platform as equity shares at fixed prices. Pledging goes on until the target is reached. After that, an investment phase begins.

As we read in the last post, the procedures involved in equity-based crowdfunding are complicated and they would be prohibitive to a small crowdfunding project. To avoid this, crowdfunding platforms have found some ways to avoid cumbersome procedures: two main models have been shaping up in the past couple of years: the cooperative model and the club model.

In the club model, platforms recruit potential funders as member of a closed “investment club”. This way, the offer is not being made directly to the public.  A popular example is Crowdcube, an equity based business crowdfunding site. Unusual, in that you could actually make a profit on your investment.

Then we have the cooperative model (also known as holding model or vehicle model) where they create a cooperative vehicle as the collecting mechanism for the investment: the individual contributions are pooled into many sole legal entities that invest in the projects. An example could be the popular GrowVc or the less known Dutch-based Symbid.

Microlending model
Microlending is the provision of financial services to low-income clients, including consumers and the self-employed, who traditionally lack access to banking and related services. The money is gathered from a crowd of people and it’s managed by a local intermediary. This is the model followed by the popular Kiva.

Peer-to-peer lending
Peer-to-peer lending is a financial transaction (primarily lending and borrowing) which occurs directly between individuals without the intermediation of a traditional financial institution. A crowd of people lend small amounts of money to the same person/organisation. Founded in 2005, Zopa was the first peer-to-peer lending company and acts as the intermediary facilitating the loans process. In 2009, Zidisha became the first peer-to-peer microlending platform to link lenders and borrowers directly across international borders without local intermediaries. Other examples include the US-based Prosper and LendingClub, and the German Smava.

These were the main models, but other classifications could be done by sector and by location. According to the survey, 49% CF platforms are used for creative projects that can range from the wider sector (such as music) to specific products, when generally one of the reward consist in the pre-order of the product itself. This has the added advantage of serving as  a market test as well. Just to name a few, we have platforms for crowdfunding independent game projects (GamesPlant), apps (appbackr), books (Unbound). Many operate in the charity sector and social enterprises, such as Start Some Good, Buzzbnk, Fundrazr.

In selecting a platform one would also want to consider where we’re more likely to find our target audience, and if our project will benefit our local community, our country or the world. Many platforms are restricted by location: for example, Kickstarter can only deal with US-based bank account; the Irish Fund:it is for any creative project or idea in Ireland (although anyone can pledge, anywhere in the world).

Choosing the right platform is a very important step in a crowdfunding project. As described above, they have significant benefits and the typical functionality to operate a successful campaign. However, they vary greatly: each platform has a specific value proposition and choosing from amongst this diversity is key to a successful campaign.

twintangibles is a Glasgow based social media research and consulting agency addressing various aspects of the impact of Social Media on business and society. Our ongoing research activity informs our consulting work. Connect with twintangibles at @twintangibles. Co-Founder and social media enthusiastic, Daniela Castrataro started twintangibles with Tim Wright, determined to convert others into “believers” in the unexploited power of Social Media. After a Masters-level degree in Translation and Languages for International Communication, Daniela worked as an Evaluation and Research Manager at the Intellectual Assets Centre (Scotland), gaining a lot of useful insight into Scottish business landscape as well as a strong practical knowledge in intangibles and how to exploit them to generate business value. All her interests and skills are now coming together to explore the diversity of applications of Social Media and their impact on humanity and social dynamics.