Q & A – The Urbanologist


We recently sat down with Max Grinnell, The Urbanologist, to ask him a few questions.

1) What excites you about using Twitter to promote Chicago and other destinations?

The immediacy is exciting and the ability to make a connection quickly and efficiently is refreshing. When I got on Twitter three and a half years ago, I was a bit skeptical and I thought it would be just a slew of celebrity gossip and so on. In terms of promoting cities which is what I do through my work as a public speaker, media professional, college professor and author, it’s amazing. The ability to share an image, an observation, a short video and so on with some of the folks that I’ve worked with, including Choose Chicago, JetBlue, American Airlines, Frommers, Rough Guides, The Atlantic, Boston Magazine, and the Massachusetts Office of Trade and Tourism is remarkable.

2)How did the idea for the #28chi campaign get started?

I knew I wanted to start out with a four week campaign that celebrated some of the well-known destinations and hidden gems in Chicago. It’s where I’ve spent most of my adult life and I love every corner of it, from the southeast side all the way up to O’Hare. I’ve always been fascinated with haikus and their terse form (5 syllables, 7 syllables, 5 syllables is perfect) for Twitter. It even gave me room to incorporate a few hashtags of partner organizations, such as Choose Chicago. Overall, it’s a great way to showcase everything from the Picasso sculpture to the campus of the University of Chicago. And the form is flexible enough to work with other cities, hospitality groups, marketing agencies, and cultural organizations.

3)Were there any turning points during the course of the campaign that were “aha” moments?

I think after the first week when I realized that I was getting a solid number of retweets from different organizations throughout Chicago  that I had found something quite compelling.  Perhaps the most difficult “aha” moment was when I had multiple images that I wanted to share each day. That’s when I had to use a keen eye to pick just the perfect image and accompanying haiku to send out each day. After this, I reached out to the folks at Boston Insider and Visit Los Angeles to craft similar campaigns.

4)What are you looking forward to most about Social Media Week Chicago?

I’m excited about the “City Data & Social” panel sponsored by the folks at Zocalo and the keynote address on “Future Trends in Technology and Social Media” . Of course, there’s the usual socializing and networking, which I’m sure will be fantastic.

5)You’ve written three books about Chicago. Do you have any recommendations for people visiting the city for the first time for SMW?

First thing, you can’t go wrong with a Chicago Architectural Foundation tour out on the Chicago River. A great way to get a primer on the city’s architecture and history. If you want to get out and walk, stop by the Chicago Cultural Center to take one of the Chicago Greeter tours, which are free.

Chicago is well known for its public art and I would recommend wandering around the Loop with my walking guide, which will take you by pieces from Miro, Picasso, Louise Nevelson, and of course, Buckingham Fountain.

In terms of food & drink, the sky’s the limit (and yes, you can drink near the top of the skyline at the Hancock), but there are a few gems close by SMW headquarters. I recommend Howells & Hood in the Tribune Tower and you can’t go wrong with a visit to Shaw’s or the old-school swankiness of the Tortoise Club over on State Street.

And yes, if you have any questions, please feel to reach out to me over at maxgrinnell@gmail.com and check out what I’m up to over at www.theurbanologist.com and @theurbanologist. 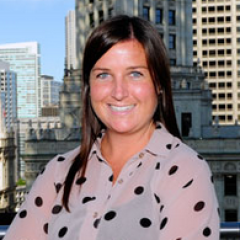