In most informal debates about youth and media we’re drawn to point out how the ‘West’ is influencing the course of  trends that seem to stick out like a sore thumb on our shores. In this interview, Edlyne Akumu  tells us about  Usanii Lab – an initiative born out the sheer pursuit of knowledge and desire to correct the ‘miseducation’ of youth in Kenya – and what it’s doing to curb this learning curve. Edlyne is an administrator at K-Youth Media. K-Youth is a youth learning centre for film production, photography and writing. I joined Usanii lab in January of this year as a student to learn communication design. We later came up with ZOOM magazine – a magazine to enlighten youth to the issues that affect us and also encourage them  to work best on their interests.We also invited people to share knowledge and skills from different countries, for example Sindiso Nyoni from South Africa. They helped in enhancing our skills both for the magazine and the design world as my colleagues and I visit primary and secondary schools to teach  design, photography and article writing.

What was the core idea behind starting Usanii-lab? What would you say caused you to start this initiative?

Usanii lab was founded by Viola Kup, a German student with the help of Shootback MYSA  and some other people from different organisations in the creative sector. The workshop’s main objective was/is to empower the participants with design skills to start their own initiative so as to get a job and income out of their skills.

It’s been a few months since the workshops started. How has the community welcomed Usanii-lab? The community has responded well to our initiative as some would give us jobs like making business cards for them, brochures and banners. With our photography skills we were also able to cover community events and also film for them. This has empowered the participants with skills to help them make a living and also opened opportunities for us. It has enhanced interactions as we have also had the privilege of meeting new people and learn from each other.

Stats show that Africa has had rapid growth in mobile usage with a majority of users being young people using social networks. What’s the best way, in your experience, to get young people out of “selfie mode” and instead use these tools to maximizing their potential?

In as much as those stats show that Africans are embracing technology and its advancements in networking, it has also reduced the chances of the meeting time and socializing. In any case it has been used to the advantage in Kenya. People are using social media to create awareness. We’ve managed to increase  45% of the game time spent in ‘selfies’ to doing outdoor events as compared to when it was 20% . These “learning” forums should be made not just for educating but entertaining as the youths in this era are energetic; they would rather study online then go for events that sit in a lecture class for a long time and miss out.

Usanii-lab is pro media, what impact would you say social media and the internet has had in the start-up.

We’ve managed to enjoy the advantages of the internet and websites. For example, we were short of some printing cost money earlier this year. We joined a fundraising website and through the networks we managed to voice out our issues and people were able to go to the website and drop their contribution. On our articles we also managed to get stories from people through social networks. We asked people to suggest on what they would love to see in the magazine and the response was overwhelming! This had helped us to come up with a magazine in June 25th  with the help of social media and Usanii participants. Any plans to expand to other countries?

We started out as a workshop and decided to do a magazine for Nairobi youths then we later thought of holding workshops around Kenya. Such places of workshop included Dadab refugee camp, Maralal and Kajiado. We have also managed to hold a workshop in Tanzania and hopefully we will partner with them to design they’re own local magazine. We wish to make Usanii lab expand to more east African countries then to the whole of Africa. We also have recognition in some European countries that is Germany, Sweden and Norway. With our connections we hope to make Usanii lab an international affair.

For more information about Usanii lab give them a shout here.

Noluvuyo Bacelak is a Cape Town based creative. As the Junior Features Writer for Imbo Magazine Noley, as she is known, covers entertainment for the youth centered South African publication. You can find Noley on Twitter chatting all things social. 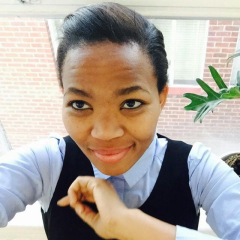