Finally Africa is getting a lot of attention from the global economic market for all the right reasons. It used to be the Africa of famine, poverty, hunger and lack – but that narrative is rapidly changing. While there is still a lot to do in terms of lifting the economic status of the people, we are moving beyond the danger of a single side to the story to focusing on highlighting ‘a different Africa’. There’s no doubt that for many, Africa is the final frontier. The convergence of social media, digital and mobile technology is powering the exportation of native ideas from Africa and this is drawing global attention, making original media content accessible from anywhere across the world. Think about the millions of Africans across America, Europe, Asia seeking to connect with their roots through news, music, videos and the arts  and you can appreciate how a connected Africa will shape the nature of its engagement with the rest of the world.

In a CNN report by Tolu Ogunlesi, he hinged the spread of digital and social media on mobile connectivity impacting  banking, education, agriculture, activism, health and disaster management and opines that will not be the end of the matter… and I agree. There are still more startups to be discovered, more and more global investors are still looking to  Africa -particularly Nigeria because of its population (150 million and counting) and abundance of youth talent. The trends are pointing to the fact that the 2014 theme of SMW Lagos is spot on – A connected Africa is the future. The spread of mobile connectivity in Africa is simply an amazing phenomenal to study. Far more impressive than the spread of electricity, smart phones have connected Africa together with the rest of the world. From the basic use of mobile phones to facilitate communications and saving time of travel; to innovative uses to power business transaction like MPESA of Kenya and the use of text messages to facilitate ease of fertilizer distribution in Nigeria.

Blackberry still has a lot to thank Africa for, especially after losing hold in the European and American markets. The disruptive entry of Tecno –apart from giving market competitors sleepless nights- are providing relatively affordable mobile phones with all the features to qualify themselves as a legitimate contender. The growth of social networking  across Africa can be attributed to mobile social networks like 2GO, Mixit and Whatsapp with Facebook, Twitter and LinkedIn making late entries into the mobile-first social networking competition. Most excitingly, homegrown apps are being developed and used to solve problems of transportation, education,  services and gaming,  allowing the rest of the world a sneak into Africa’s digital innovations. When the news broke that Paul Bragiel, a General Partner at Savannah Fund, contacted Aliko Dangote on twitter for a private meeting at the World Economic Forum, they were only stating the obvious – Global investors are loving the sounds and data coming from Africa. While the opportunity for economic growth and development are slowing down in developed countries, the opportunities in Africa are shaping up. While some global investors are biting a chunk of native startups like Konga, IrokoTV, some other startups are selling off ( ask Jumia  and some other African startups are also partnering with global companies and institutions in terms of partnerships and expansion into other African continents. Way before Google announced its YouTube Partner Programme in Ghana, Nigeria, Senegal and Uganda, Nigerians were already developing content accessible to the global space. Top Blogs, and video websites in Nigeria are giving Nigerians in the diaspora media content platforms to connect back to their roots. With the ease of starting online media publishing companies, several media content publishing websites are on the rise; news (news24, the Vanguard, Punch), technology (Techcabal, Techloy, HumanIPO,Bits), Entertainment (Niaje, Lindaikeji, 360nobs, Olorisupergal), music (Notjustok, Spinlet, Iroking).  The potential to monetize content from Africa across the world has been exemplified by companies such as  IrokoTV, and Spinlet.

Advertisers will always follow the crowd and social media and digital engagement is the way to go. Far from those days when they were cynical about the relevance of social and digital entertainment companies can now connect with  fans globally and are open to more engagement opportunities where they can target audiences in a more meaningful way than before.

No doubt, the youthful mass of Africa, the spread of internet via mobile and social media connectivity is leading Africa towards the path of growth. Every individual now has an opportunity to connect with the world, create something powerful enough to make a dent in the global space. 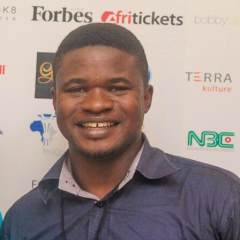