Afro-Beats To The World – What Went Down 
Having attended a number of panel events, I’ve come to realize that having bosses in the industry on the panel totally creates a wider spectrum than is expected; which is what went down at the Afro-beats To The World event. It was a conversation that took us through the different facets the music industry covers — upsides, downsides and the in-betweens.

The panelists agreed that Social Media has been one of the greatest facilitators for Nigerian Music because everyone can now listen to our music real time and it can and has travelled, touching every country in the world. One of the most beautiful things about Nigerian music is the strong fusion between genres and how they fit together.

When asked if the panelist thought artists were getting enough credit from the widespread reach of their work; the general consensus was on the negative. The thing is, it is our time; in Nigeria and Africa at large. Everyone is looking in this direction for the release of hot new tunes, and they are getting access because of globalization. However, we see that there is a huge gap betweeen just getting recognition and actually getting recognition that has enough financial impact.

Dbanj who was one of the panelists. He stated that if he was getting all the recognition and still getting paid peanuts; then it’s not enough. He explained that artists by themselves needed to know for sure what they wanted. If it is just recognition, then that could come easy, but if it is more than that, then there’s a need for all artists – including him – to further develop themselves.

There was also a lot of banter on what “Afro-beats” really is. You see, 10 years ago, every song that came from every other part of the world, was tagged to be ‘world music.’ Then Fela took Afro-beat to the World and so Afro-beats became the term to distinguish world music from ours, but the thing is not all of our songs are Afro-beats. Plus, even categorizing all of them under Afro-beat downplays the commitment Fela – who brought it to live by producing music that addressed social issues and put his life in danger – put in to take the words out to the world. It was agreed that our songs need to start having their own categorization, ESPECIALLY without the Afro! Dbanj said “an artist is an artist”; I would add “a genre is a genre”

On the “Majors” – western music companies – coming to our market; they all had their reservations. Obi Asika, entertainment industry entrepreneur, said his biggest struggle with this is that while he would like them to come, he doesn’t want them to mess with the Nigerian sound like they did with reggaeton. Audu Maikori, president of Chocolate City Entertainment, on the other hand, spoke passionately on this; saying that management companies here need to create a type of gatekeeping tactic so that the majors cannot pick up our talents without coming here first and having our ground rules. Dbanj’s view on this was this; they’re coming here isn’t doing us a favor because we have toiled and built the industry from scratch and it is simply going to be a case of reaping where they haven’t sown. If they are coming, they have to help in building the business as opposed to simply setting up a makeshift office somewhere and getting a couple of talents signed up.

On matters in our industry that need to be addressed, Audu touched on distribution issues, piracy, paying royalties. Dbanj also introduced C.R.E.A.M, a platform he launched to help talents from around Nigeria who don’t have the right platforms to showcase their talent to the world.

On final notes, I’d close with Audu’s one advice; Nigerian artists need to learn never to compromise on their art or professionalism. Plus, It would be a huge miss to not acknowledge the awesomeness that was Dbanj doing his thing on stage just before the real conversation started. Oshe! 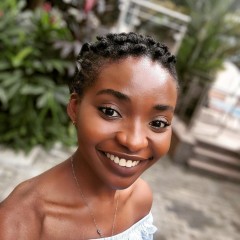